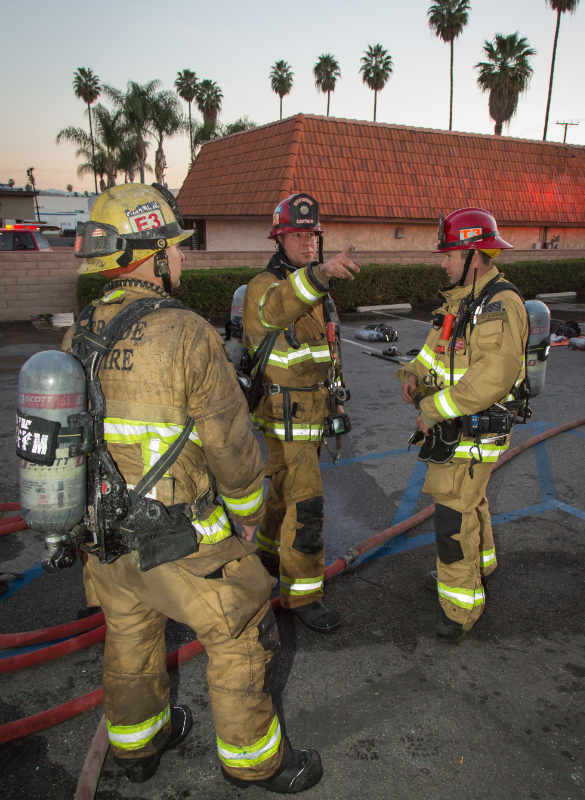 May 8th, 1895
A FRATERNAL GATHERING : First Meeting of Representatives of Local Companies

An Entire Day Given Up to Routine Business. A Constitution Adopted, Officers Elected and Details Perfected Pursuant to call from the Redlands, Gal., tire department the following organizations met, by their delegates, at San Bernardino on Monday, in the hall of Hose Company No. l. for the purpose of organizing a permanent body to be known as the Southern California Fireman's Association, San Bernardino, Pomona, Redlands. Riverside, Santa Barbara and Santa Monica tire departments.

The convention organized by electing A. G. Jack-on of Redlands chairman pro tempore, and M. Burku of Santa Barbara temporary secretary. At 10 a.m. Mr. Jackson called the meeting to order and addressed the assembled delegates upon the objects, aims and purposes of the firemen's convention. The original invitation for this meeting extended by A. G. Jackson to all lire departments in Southern California, was read, after which the convention listened to the reading of replies there to from the different companies. The fire departments of Redlands, Los Angeles. Santa Monica. Santa Barbara. Pomona, Colton, Riverside and San Bernardino responded not only favorably, but enthusiastically. An unfavorable answer was returned from the chief of the Pasadena tire department, although it docs not appear that this officer presented the matter before the local fire organization. O. W. Bates of Santa Barbara and 0. l. Collins of Redlands offered a number of valuable suggestions concerning the proper business to transact at this point. By direction of the convention the chairman appointed the following committee on credentials: Messrs. O. I. Collins, Redlands; G. V. Bates, Santa Barbara; G. W. Strong, Pomona; George F. Ward, Riverside; J. H. Titte, San Bernardino. A recess often minutes was then ordered to enable the committee to formulate a re-port.

The committee submitted the above as a partial report in anticipation of the arrival of other delegations, and with this understating the report was duly adopted. Delegates G. F. Ward of Riverside, G. W. Strong of Pomona, J. 11. Tittle of San Bernardino, Proceeding With the permanent organization of the Southern California Firemen's association, the following officers were elected : President. O. IJ. Collins of Redlands; first vice president, A. G. Jackson-, of Redlands; second vice president. G. \V. Hates of Santa Barbara; treasurer, .1. H.Tittle of San Bernardino; secretary. Edmund M. Burke of Santa Barbara; trustees. M. A. Bagley of Colton, G. W. Strong o. Pomona and A. J. Myers of Santa Monica; delegate to the national convention of firemen, O. D. Collins. The president-elect then took the chair and delivered a neat speech, thanking the convention for the honor conferred upon him.

The other officers also entered upon the discharge of their duties and made appropriate addresses. the following committees were appointed by the president: 0.1 printing, J. E. Matot, G. F. Ward and J. 11. Tittle; on tournament rules, C. C. Zillis. J. E. Matot and R. Roberta; ou railroad and transportation, M. A. Bagley, Adam Ott and G F. Ward: on legislation, G. W. Strong, Charles Binkley and A. J. Myers. The committee on tournament rules submitted its report concerning the regulations which should govern the annual) tournaments to be given under tbe auspices of the association. A few amendments were offered, all the ideas proposed were freely discussed for some time and finally the report, of the committee as amended, embracing a full set of rules, patterned after the Missouri State Southwestern Firemen's association, was adopted by unanimous vote. The selection of the next place of meeting being in order, G. W. Bates arose and in a forcible speech placed Santa Barbara in nomination. He reminded the delegates that no better time or place could be chosen for the next session and tournament than the Channel City at the floral festival of lfm. Edmund M. Burke seconded the nomination and urged the selection of Santa Barbara on account of the vast advantages presented by that city, the cheap rates of transportation by land and water during the carnival season, the importance and strength of the local fire department and many other substantial claims.

Tho Barbarenos made such an able presentation of their case and spoke in such high terms of their city that no rival had the temerity to speak, and in consequence the" convention, by unanimous vote, selected Santa Barbara for the next session and* tournament of the newly organized Southern California Firemen's association. The secretary was instructed to forward copies of the constitution and by-laws and organization proceedings to all lire departments in Southern California. Several Incidentals were debated and many suggestions offered to the officers and committees, while the delegates were duly advised to further the interests of the association in their respective departments. A vote of thanks was extended to Fire Chief J. H. Tittle and to .he San Bernardino fire department for their hospitality, kindness and many acts of courtesy. Closing remarks were made by Messrs. A. G. Jackson and O. D. Collins of Redlands, the promoters of this organization. On motion of S. 1,. Wright of Riverside, seconded by G. F. Ward, also of Riverside, the association adjourned.