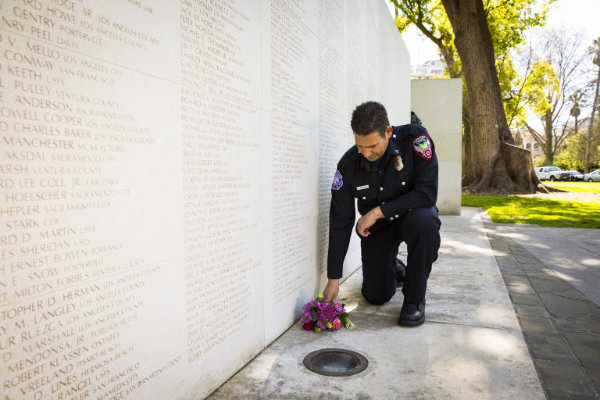 Located on the grounds of the California State Capitol in Sacramento, this stunning memorial depicts the heroism of the profession and the anguish felt when a firefighter falls in the line of duty.

A Fitting Tribute
The centerpiece of the California Firefighters Memorial is a stunning brushed limestone Memorial Wall with the names of more than 1,300 California firefighters who have died in the line of duty since 1850.

The Memorial Wall is framed by two bronze statues depicting firefighters in action. One statue — Holding the Line — features four firefighters working together. The other — Fallen Brother — shows an anguished firefighter carrying his “fallen brother” away from the flames.

The ceremony features a moving uniformed firefighter procession, personal tributes and the presentation of a U.S. flag to the families of those whose names are newly added to the Memorial. The ceremony has become a touchstone for the profession, and a chance for firefighters, families and ordinary citizens to grieve and remember together.