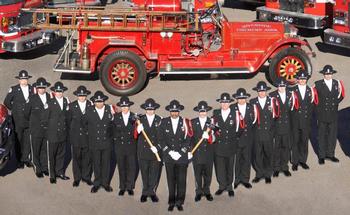 The Guard presents the colors of the Nation, State of California, City of Riverside, Fire Department, and Local Union at many events held in the City, the State, and the Nation. During the course of the year, they present the colors for events such as promotion and award ceremonies, the Local’s annual retirement dinner, and various fire department and other community related meetings in the region.

The City of Riverside Fire Department/Local 1067 Honor Guard has been continually recognized for their outstanding efforts, their distinctive uniforms and their outstanding performances adding to the quality of many events. The pride and honor of being on the Guard is apparent, showcased by the professionalism and dedication of each of its members.

The Honor Guard is under the direction Commander and Bugler Thomas Jay. It consists of 18 members participating in approximately 20 events a year and is strictly a volunteer organization.